This traditional Mardi Gras yeast coffee cake is formed into a ring, frosted and then sprinkled with purple, green, and yellow sugar.

King Cake is a favorite in our family during Mardi Gras. However, it is more of a bread than a cake. When my boys were young, I made a King Cake on Fat Tuesday, the day before Ash Wednesday. Since it has similar ingredients like cinnamon rolls, I would get up early, take the proofed cake out of the refrigerator, bake and frost it in time for my family to have it for a decadent breakfast. Instead of putting a baby in it, which is traditionally done, I put a gold coin in the cake and it is exciting to see who the lucky one is that gets the coin. Though the boys are grown and live on their own, my husband wants a King Cake every year and he insists that I put a coin in the cake!

I was introduced to King Cake many years ago when I attended a conference in New Orleans during Mardi Gras. King Cake is available from January 6 through Fat Tuesday (the day before Ash Wednesday). In Louisiana, p take it to work or friend's homes during this time of the year. You can find it in most grocery stores or bakeries in New Orleans, but it is easy to make at home. The colored sugars on the King Cake make it special. Purple represents justice, green represents faith and the gold represents power. In addition, a baby representing baby Jesus is inserted in the cake after it is baked. The tradition is if you get the baby, you have to bring the cake the next year.

You can make a King Cake at home but be sure to allow enough time since it has to be proofed two times. The dough is a yeast dough that you fill with cinnamon sugar, cream cheese, or cream cheese and fruit. This recipe uses a cinnamon cream cheese filling with roasted pecans. If you prefer, you can leave out the nuts.

Bake a King Cake for your family! I bet it is a hit and will be a tradition just like it is for my family. Happy Baking!

Please note: This recipe is from Southern Living and I have made a few changes to the original recipe.

This yeast coffee cake is formed into a ring, frosted and then sprinkled with purple, green, and yellow sugar.

This recipe is from Southern Living.  I have made a few changes to the original recipe. To bake it in the morning, place the cake in the refrigerator for step 13.  In the morning, take it out of the refrigerator, let it sit for about 20 minutes and then bake it.  You might need additional baking time.  Once it is finished baking, take it out of the oven, let it cool about 30 minutes.  Frost it and sprinkle the sugars on the cake.

Did you make this recipe? Let me know! Cancel reply

This site uses Akismet to reduce spam. Learn how your comment data is processed.

Welcome to my food blog! My goal is to inspire you to prepare delicious meals for your family by sharing simple and healthier recipes. Step-by-step instructions are included to ensure that you are successful. Come join me in my kitchen and let's start cooking! Learn more about me… 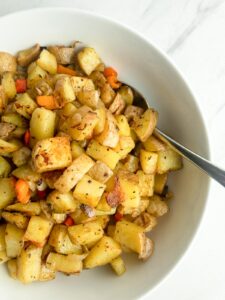 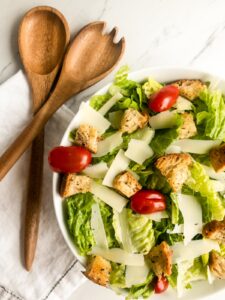